A self sufficient mobile house

Slovak architects have produced a solar and wind-powered mobile cottage where you can live for months. In the Ecocapsule you won’t have a washing machine, but you’ll have a mini fridge and TV.

From a distance it looks like a giant silver egg on small wheels. Only the large windows suggest it could be some kind of dwelling. A wind turbine and a solar panel on the roof give the idea it might be related to renewable energy. In fact it’s both. This is an Ecocapsule: a self sufficient mobile house invented by Slovakian group Nice Architects.

It is designed to produce more electricity than it consumes and harvest more rainwater than its occupants use. Theoretically two people can live in it for months, without access to electricity plugs and water pipes. This is not a prototype or the inventor‘s vision. The first 50 items of Ecocapsules went into production just recently and for only 79 900 euro it could be yours.

House not for artists

The story of an micro ecological cottage began 10 years ago when Slovak architects attended a competition for a cottage for an artist.

“Our project that was an egg-shaped cottage did not win, but it was picked up as one of the best ideas,“ Tomáš Žáček, CEO and disign director of Ecocapsule, says for InnovateCEE.

After that they had felt a big wave of interest from professionals and the public, so they decided to follow up on the project. Unfortunately, the technology for an energy independent house was not developed properly at that time. So Slovak architects improved their idea just carefully focusing on the technology and the shape.

Finally in 2014 they prepared a prototype with enhanced technology that enabled to create an energy independent small mobile house. In May of the next year it was publicly unveiled at Pioneers Festival. A month later the group got thousands of pre-orders and by the end of last year the first lot exited the production line.

The Ecocapsule is a self-sufficient house. It does not need to be plugged into the traditional power and water supply as it can generate both resources from the surrounding environment. It produces energy thanks to high-efficiency solar cells that produce 880W at their peak and low-noise wind turbine, which delivers up to 750W during day and night. It is also equipped with almost a 10 kWh battery, that provides electricity for approximately 4-5 days.

Rainwater is collected on the surface and in the 550 litre water tank it is filtered. According to inventors such amount of water should be enough for two people for a period of three weeks. Shaped like an egg the house has its walls made of two layers of aluminium reinforced polycarbonate with aerogel insulation sandwiched in between, which is designed to minimalize heat loss. The Ecocapsule has a central computer (controlled via smartphone or tablet) that monitors its electricity and water levels, as well as outside weather conditions, allowing it to predict how long its supplies will last.

Originally the architects planned their invention to be a dwelling for people who need to stay in nature for a long time. The Ecocapsule was designed to be a cottage, pop up hotel, a scientific research station, but it turned out it to have more applications and serve as well as disaster-relief shelter or a charging station for electric cars.

“Recently we got an order from the Australian police for Ecocapsule with bullet-proof surface,“ design director explains more potential applications of the house.

Moreover they are in contact with hotel resorts on isolated islands or with companies that offer mobile offices or vending stalls.

The Ecocapsule is easy for transport, as it has four small wheels and two hooks on the roof that can be shipped, airlifted, towed or even pulled by pack animals.

It can be used almost all over the world, but its resistance has limits.The safe temperature is from -15 to + 40 degree centigrade, so it is not suitable for the Arctic or in a desert.

“Our vital electric systems have troubles with extreme temperatures, but we are working on improving the devices,“ Žáček says.

Another limit is time, you can live in there for weeks or months. Theoretically you can live there for a whole year, but you have to have access to the drinkable water and not have many belongings, because the space is limited in the Ecocapsule. However, it can comfortably house two people in 8 square meters. Of course under the condition that you accept the lack of some amenities. For example you do not have ordinary house appliances such as washing machine or microwave that consume too much energy, instead there is a mini fridge, TV or PC. 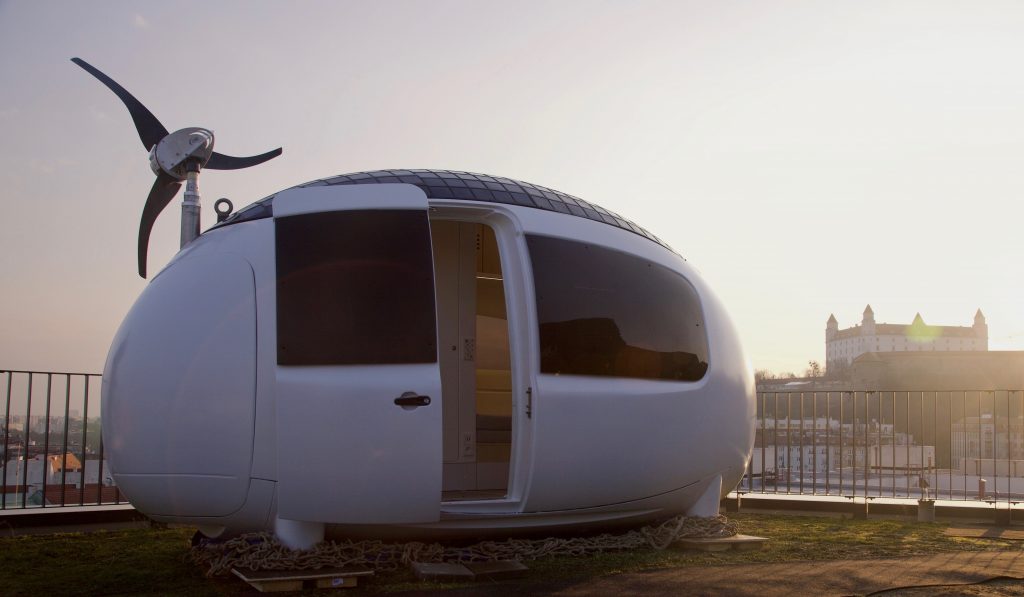 Plans for the future

Founders of the company that produced the eco house have been working on obtaining financial backing for their project for three years It has managed to attract a group of international investors via crowd investing. One of the investors and purchaser of its product is a Japanese company.

“Our customers are various people from eco-minded people, to sportsmen and managers or the owners of a ranch,“ Žaček says.

The start-up has already released the first units from production at the end of 2017. The price starts at 79 900 euro, because just the battery costs 7 000 euro. The first edition of Ecocapsules is limited to 50 pieces, while the second, mass produced edition will be available next year at a lower price.

The architects who are behind the ecohouse have also voiced their intent to develop different variants of the Ecocapsule, such as a model for camping.

“We are finishing houseboat model and we intend to enhance solar panels and in a longer time perspective we want to connect more Ecocapsules together in blocks such as a beehive,“ Žaček concludes.

business Biodegradable glasses: where science cooperates with design and fashion

InnovateCEE Academy Don’t push a dinosaur on your own. 4 tips from a bank for start-ups