A cheap and easy to use barrier tent was developed at the Medical University of Warsaw.  The device protects doctors in situations of greatest exposure to coronaviruses, such as intubation or transport of Covid-19 patients. 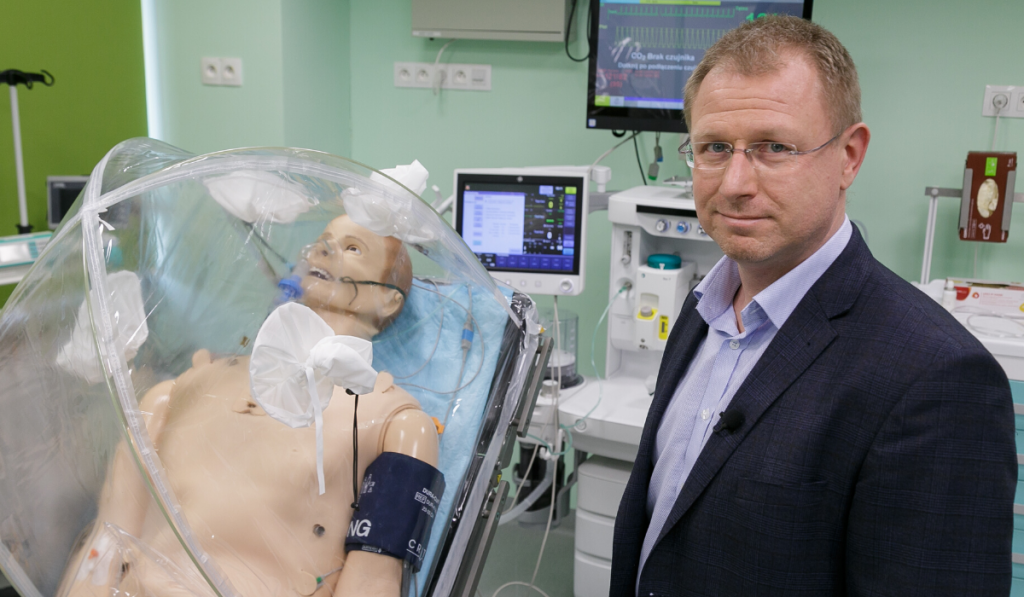 InnovateCEE: What is a “barrier tent”?

Dr Marcin Kaczor: The barrier tent is supposed to be an additional protection for health care workers. It is supposed to separate the personnel from aerosols, i.e. from the coronavirus, which is excreted and exhaled by patients with COVID-19.

I would like to to strongly emphasize that it should be used as an additional protection and not as a substitute for individual protection equipment. It is like with an airbag and seat belts in a car. Although we have an airbag, we still have to keep our seatbelts on. Same here, we first have to have full protection and then the tent can come in handy.

If the tent is an additional protection, then what is it for? In what situations can it be used?

The initial idea was to create a device that would protect doctors when intubating and extubating patients. Intubation is a procedure during which an intubation tube is inserted into the patient’s airways so that they can be ventilated, that is connected to a ventilator. Usually it is done in the operating theatre, but now, due to the epidemics, also in intensive care units. This is the moment when doctors are most exposed t the virus. The second such dangerous moment is extubation, which means removing the tracheal tube. Very often patients then start choking, coughing.

But there are other situations when the tent can be used. For example, intra-hospital transport. Imagine that we have a coughing patient who needs to be transported from point A point to B point in the hospital. In this case, the tent will act as an extra safeguard. The next place is in emergency medical teams. It is a situation when an undiagnosed patient is at home and there is a suspicion that they are infected with the coronavirus and suffer from Covid-19. Thanks to the tent the paramedics can safely take them to hospital.

CENTRAL EUROPEAN INNOVATION IN THE FIGHT AGAINST CORONAVIRUS

What does the construction of the tent look like?

We wanted the tent to be quick to use so we don not waste time setting it up, trying it on, etc. That is why it opens like a beach tent: we take it out of the bag and upon one move it is ready to use. I am an anaesthesiologist and since the tent was to be used during intubation, it was obvious that there must be two holes in it. Then, when my colleagues and I were doing our first tests at the medical simulation centre of the Medical University of Warsaw, it soon turned out that we needed two more holes for assistance. Such a solution will allow to perform more procedures on a patient in the head and chest area.

Where did the idea for such a device come from?

It was two events. While working in the medical simulation centre we were conducting training for WUM staff on the use of personal protective equipment, i.e. how to put on a mask, a suit, a face shield and how to take them off safely, so as not to infect ourselves. We noticed then that people have huge problems with undressing from infectious material. At the same time, a few weeks before the coronavirus outbreak, we conducted training for students on how to use the “Bio-bag”. It is a transport device for infectious patients, which appeared on the market en masse when the Ebola epidemic broke out. It is, shall we say, a material-plastic coffin in which the intubated patient is placed with all the equipment and can then be transported without risk to the environment. We wanted to show the students how difficult it is to place and then take the patient out of such a device and coordinate the team. These two events resulted in the idea of creating something that would be light, easy to use, accessible and cheap, because a device that costs 20 thousand is viewed differently than one that costs 200.

How long did it take to develop the tent?

We went like a bomb. It took us 2.5 weeks from the moment I drew thetent on a piece of paper to the moment we received the prototype. The main problem was finding a company that could manufacture the tent. We had no idea who could do it. The tent is made of film, so first we found a company that makes food film packaging. At first they agreed, but when they got to know the whole concept they withdrew. There were several unsuccessful attempts, and finally we found a company that makes tents and they sewed it for us. Hence the name “barrier tent”, because at first the tent had no name. It was just “something”. 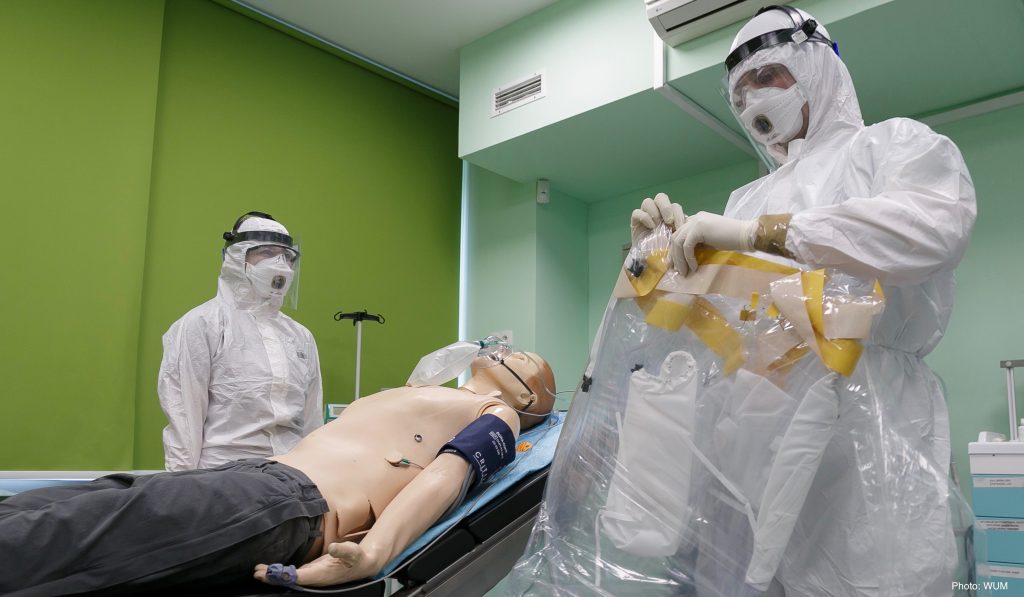 Who worked on the device?

We developed it at the Medical Simulation Centre. We have cooperated with scientists from other Warsaw universities. The Warsaw University of Technology has provided us with key research in terms of checking the tightness of the tent on joints. It was our basic concern that we by any chance do not make an effective looking strainer. We are now working together with the Faculty of Physics of the University of Warsaw on the concept of aerosol removal from inside the tent. The tent is designed to be used in hospitals and the obligatory element is oxygen supplementation, i.e. providing fresh oxygen through a mask. But the patient is also breathing out in the tent and we need to have a way to remove the exhaled air in such a way that the environment is as little contaminated as possible.

The prototype is ready. What happens now?

The tent went through its first airborne tests. The Polish Medical Air Rescue has already started testing it. The Air Rescue is a very specific place to test equipment. There is no place for mistakes. Especially for these tests, we have changed the size of the tent a few times, now it is lower, narrower, a bit shorter. Also, the mounting sites are a bit different. Air Rescue tested it from all sides and gave us very good feedback.

Besides, we are still testing it in the simulation center. We are currently conducting tests on healthy volunteers. For example, now we are testing the safety of staying in the tent for a longer period of time, we are looking at whether there are no changes caused by CO2 accumulation. So far we have tested several people and there are no such symptoms. And soon patients might start using the tent because the Polish Ministry of Health ordered 8,000 units.

Dr Marcin Kaczor is anaesthetist and the head of the Medical Simulation Center of the Warsaw Medical University.