A rapid and cheap diagnostic test can reduce antibiotic use

Is this flu, cold or bacterial infection? Should you take antibiotics or not? Polish start-up SensDX has invented a rapid diagnostic test that helps to get answers to these questions in less than 5 minutes. Their product was recently awarded during “EIT Health InnoStars Awards”

“It’s just flu, but I will prescribe you an antibiotic, just in case”.

Dawid Nidzworski was one of hundreds of thousands of patients, who heard such words from their GP. Every year in flu season doctors prescribe millions of antibiotics. The majority of them are totally unnecessary, despite this patients take them. Actually 40% of all Europeans wrongly believe that antibiotics work against colds and flu.

But Dawid, unlike other patients, was a biotechnologist and at that moment as a PhD student was working on flu viruses. He was wondering why he should take antibiotic. Finally the GP admitted they are no methods to check quickly whether the patient had been attacked by a virus or by a bacteria. Of course, the doctor can take a sample and order a PCR test, but it costs a lot. The cheaper way is a plating test, but it takes a couple of days, even a week, to get the results. There are also quick strip tests (similar to pregnancy test), but their effectiveness is not very high.

“Is it possible to invent a rapid, cheap and precise flu test? – Dawid asked himself.

It took a few years for him to find answer, but it seems he has succeeded. Today Dawid Nidzworki is a co-founder and CTO at SensDX, a medical start -up that creates a diagnostic platform allowing users to accurately identify specific diseases at home. Their first products – a rapid flu test and test for upper respiratory tract infections, which are to enter the market next year. They are quick, cheap and their accuracy can be compared with PCR test; claim the inventors.

The Flu SensDX in less than 5 minutes detects the flu virus at an early stage of development. Multi SensDX identifies which virus or bacteria causes the upper respiratory tract infection.

“At the beginning we developed a flu test, however after consultations with doctors and market research it turned out that detecting a pathogen does not solve the problem. We need to find out what kind of virus or bacteria is in patient’s upper respiratory tract. Mostly there are co-infections, only if we know all pathogens, we can decide whether and what antibiotic will be best for the patient. Our test can detect 7 different pathogens, we chose them after we had checked market demands”, says Katarzyna Pala, Director of Business Development Department in SensDX

How does it work?

SensDX’s sensors consist of two parts, the first one is a “Mobi” device. This is a universal reader that can be used to diagnose various diseases, the second part is disposable, a replaceable electrode; each is designed for one, particular illness.

“The secret behind successful pathogens detection is the electrode” emphasises Katarzyna Pala.

The device is based on electrochemical impedance spectroscopy. To make it simple: it monitors the electric current flow in a tested sample and measures the difficulty to pass an electric current. The electrode is covered with special biological layer that recognise surface markers of viruses or bacteria. Its formula is a company’s secret. If a pathogen is present in the sample, its peptides stick to the electrode. As a result, the flow of current is changed. If a pathogen is not present, current flows as before.

The technology might seem complicated, but the testing procedure is said to be very easy. Just collect throat swab, put it in a special buffer with the solution (it is a part of the test kit), put a drop of solution to the electrode attached to the device. After three minutes you will see results on your smartphone.

“We were keen to make the procedure easy, cheap and user-friendly, so everyone could do the test. Ultimately we want allow patients to send result directly to their doctors”, says Katarzyna Pala.

The price of the single test kit composed of electrode, swab, test tube and solution is set at around 6 or7 euro. The price of a Mobi device is not known as yet.

From lab to the market

The company was founded in 2014, but works have sped up in last two years. The firm received a few grants from the EU funds (including Horizon 2020), it found a private investor and submitted 4 patent applications, one in line with PCT procedures. Recently it took part in Impact Poland, an acceleration programme for promising Polish start-ups from health and agrifood sectors run by FundingBox.  Last December SensDX won the “EIT Health InnoStars Awards” prize from the European Union’s Horizon 2020 research and innovation programme.

“I think the jury appreciated that we don’t have just technology. Technology alone is nothing. We have a product and a solid business plan, of how to introduce this product to the market”

“At this moment the Flu SensDX is at the stage of prototype. It is a working prototype”- stresses Katarzyna Pala.

“Already we have developed the method, a working electrode and a prototype. We conducted first experiments on human samples. They have shown that our test is as effective as the PCR test. We are sure that at laboratory stage everything works. Now we need to rescale our method”, continues Pala. 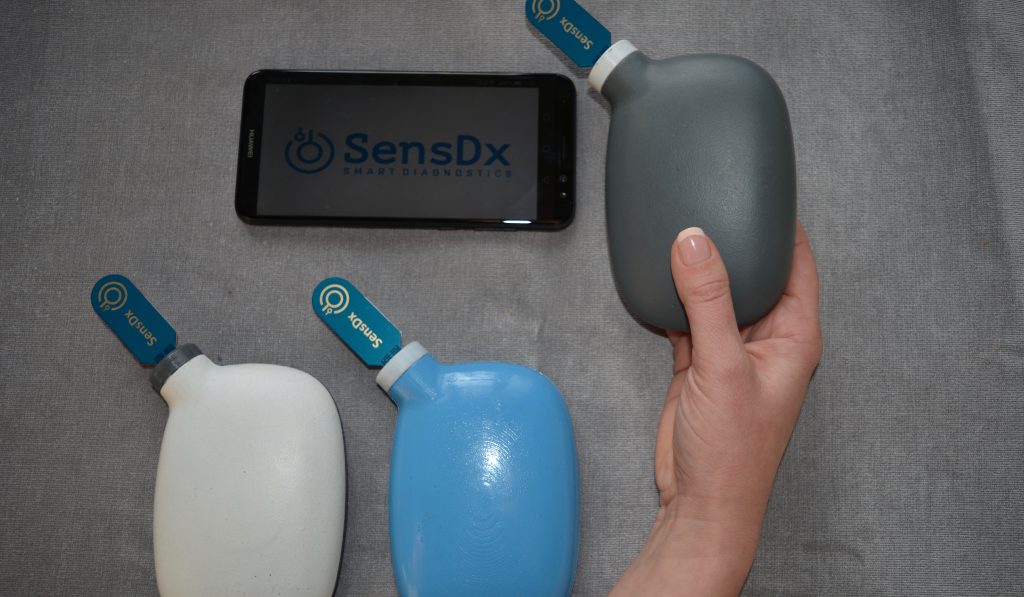 In total around 40 people work on the devices and how to scale them. The team is composed of biotechnologists, electronic and software engineers, chemists and electrochemists, as well as people responsible for production automation, prototyping or business development, marketing and even design. Now the company is preparing the production line and plans to obtain certification for its devices in Europe. The products will enter the market at the beginning of 2019. First in Poland, but target markets are Western European countries such as UK, Germany, France, Italy.

First, however, they need to test their tests on humans and on a larger scale. Clinical research is scheduled for the next flu season. The company has already contracted a firm to do it. The founders hope the research results will help Flusensor to become more credible in the eyes of doctors, because they don’t want to viewed as a gadget, but as a professional device used by doctors and patients.

“ Everything is ready; all we need is time, and flu”. says Katarzyna Pala.

SensDX team must be the only people in the world, who impatiently are waiting for the next flu season.

InnovateCEE Academy What to do before you build MVP?