There’s new technology that allows two people see the same virtual objects in the street with no extra hardware, just a mobile phone. It’s called collaborative augmented reality, and it was developed by the Blue Vision Company.

Imagine walking down the street guided by augmented reality signs: an AR mark on the street tells you the right direction, a virtual thumbs-up on a building shows that this is an often recommended pub, funny AR emojis left by a friend say which places are worth visiting and which aren’t. You can make your own virtual mark and share it with your friends. And most importantly, these AR signs are seen not only by you but by everybody, and you don’t need any special hardware, just your mobile phone. That’s basically the main idea behind the technology of the Blue Vision Company, and three of its co-founders are Slovaks. 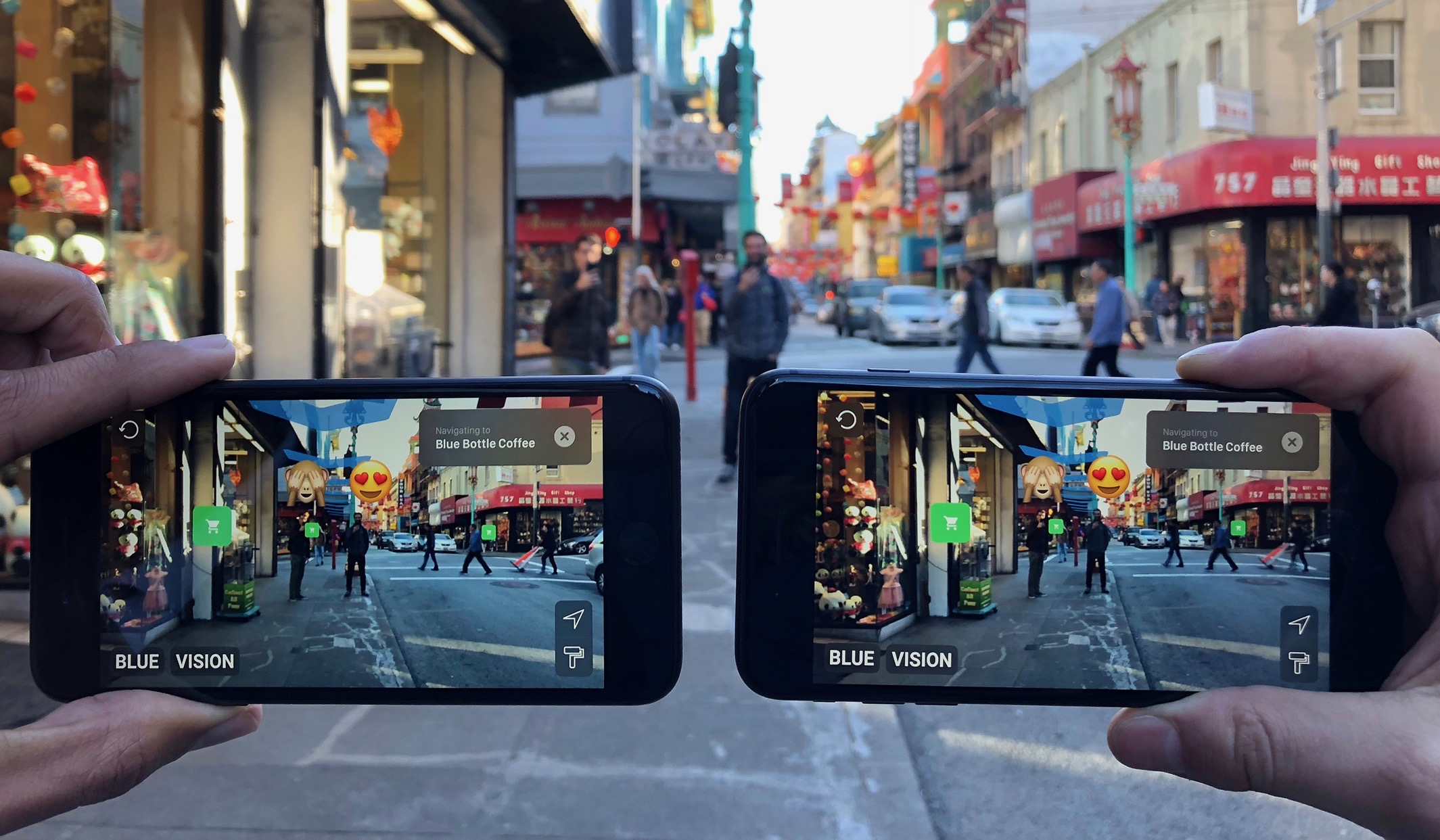 The idea for setting up the company was conceived not in Slovakia, but in Oxford seven years ago. Three of the co-founders were working on their PhDs in Robotics and Computer Vision there, while in the meantime the two others were rebuilding and selling different start-ups for hundreds of millions. After they finished their studies and wrapped up other projects for IT giants such as Google or Microsoft, they got together to found Blue Vision Labs.

“Our mission is to solve the core software problem behind augmented reality and robotics and make it available to everyone to build applications,“ says Peter Ondruska, CEO of Blue Vision.

Even though AR is seen as advanced technology, it in fact has many limitations. For example, to enter into an AR scene special equipment is usually needed, and if you add new objects to a scene, no one else can see it. The company wanted to develop technology that would enable users to totally immerse themselves in the digital experience.

One of the biggest technical challenges they had to overcome was how to allow two people to see the same virtual objects in interactive augmented reality. A problem like comparing visual data from 3D maps requires the intersection between state-of-the-art computer vision and engineering.

Ondruska makes a comparison: “We are using advanced computer vision to process visual data from the camera and the 3D map of the area. The technology is incredibly complex but in a nutshell it’s similar in principle to the celestial navigation people used for centuries during sea voyages”.

A map is the key

This year the company finally launched its product: Blue Vision AR Cloud. The key component of the developed technology are high-accuracy AR maps of entire cities, which are stored in the cloud and continuously updated. Then the software can compare what the camera sees with a city map and determine your position with precision, down to the centimetre. It is more precise than GPS location. It can save and share content in real time and all you need is a smartphone with a camera to do it.

The company opened its solution to developers to use and build the new applications in augmented reality.

“Our system works as a library that can be included into any app for iOS or Android and allow it for shared augmented reality,“ Ondruska adds.

Unlike its competitors, Blue Vision does not need special hardware. It works on anything that has a camera, whether a phone, a headset, a drone or a self-driving car.

A constantly updated map of the city is part of the new technology. So the issue of privacy arises, something the company stresses that it takes it very seriously.

“It consists of a number of elements of how we process, store and communicate the data. The key is that no visual data is stored on our servers, only the landmark information necessary to locate an image on a map,“ Ondruska says. Moreover, this map never leaves company’s servers, so there is no risk of exposing any information to anyone else. 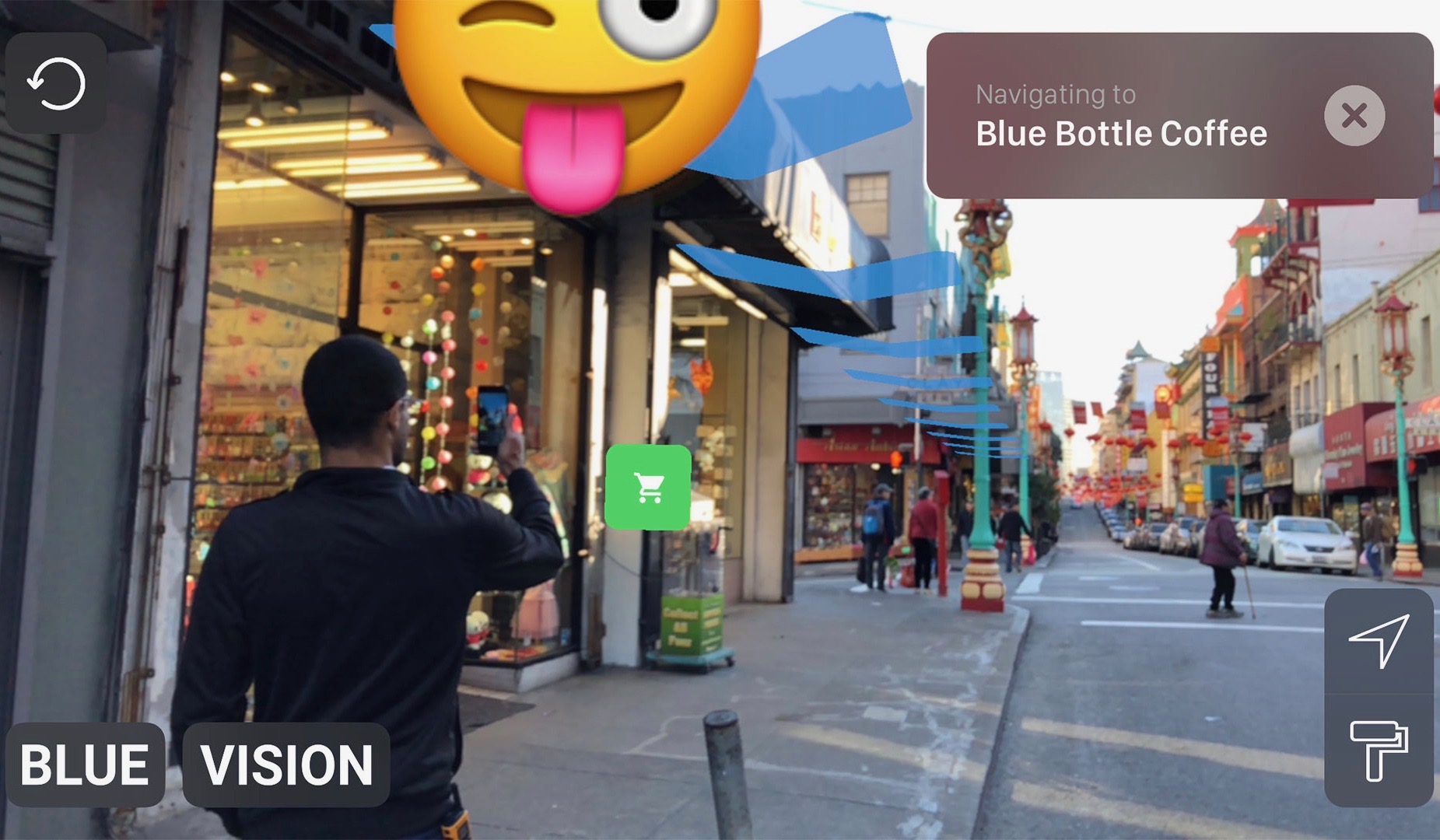 The co-founders count on using their technology in the gaming industry, navigation apps, social media, and education. It also has potential in commerce. Imagine getting recommendations for nearby products, and promotions. Content can be simply overlaid on top of a restaurant to display information, reviews, and comments about it, or about hotels near the current location.

It could also shape the future of transportation. Instead of struggling to find your rideshare or your friend in a busy street, you would simply see an augmented reality marker hovering above them, allowing you to connect intuitively.

The London-based start-up already has over 1,000 developers in their private beta program, and they plan to grow this further this year. “We were looking for a strong partner that can support us in our next stage of bringing the technology to the market,” Ondruska says. The start­-up has already received support from the Google Ventures fund.

Just recently, Blue Vision was sold to US car-sharing company Lyft for around $72 million, with $30 million on top of that based on hitting certain milestones. Lyft hopes to improve its autonomous car using Blue Vision’s technology.

MORE ABOUT AUGMENTED REALITY AND INNOVATIONS FROM CENTRAL EUROPE

“A company Matsuko uses mixed and augmented reality and artificial intelligence to create 3D holograms for remote communication between people. The solution sounds simple- transmitting human body and face in a 3D picture; but it is much more”

Do you have an interesting story to tell? Write to us: contact@innovatecee.com